The SAINT AUGUSTINE CHURCH of Panglao, Bohol is located on the south-western side of Panglao Island, 18 km (11 mi) from Tagbilaran City, the capital of the province. The church is noteworthy because of its twin antique confessionals carved wi 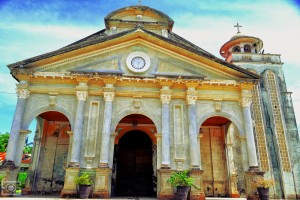 th grape and dove patterns. The church is also known for its ceiling murals depicting the sacraments. Above the main altar is a hexagonal dome, its ceiling filled with a mural of the Holy Trinity surrounded by eight divisions of angels.

Panglao, Bohol, was established as an independent parish in 1782, but Recollect records show that they took charge of the town in 1803. The present church stands beside the ruins of an older church, probably one built by the Jesuits before their expulsion in 1768. Whatever remains of the older façade indicate that it may have been Baroque in design. This church was ruined before in 1886, when it is reported that a provisional church of wood and tabique was constructed.

Recollect Fr. Valentin Utande started building the present Panglao Church in 1894 up to 1897 when he was transferred to another parish. Two other Spanish priests, Rev. Fr. Eugenio Gil and Rev. Fr. Pedro Jimenez continued the construction slowly until 1898 when the Philippine revolution against Spanish authority broke out. The construction was abandoned as the Spanish priests assigned in Panglao have left.

In 1912, Rev. Fr. Emiliano Veloso, the assigned parish priest, continued the construction with the cooperation of the church leaders, town officials, and residents of Panglao. A greater part of the nave was done in 1920 and by 1924, though still unfinished, a 4-day inauguration affair was scheduled with the Bishop of Cebú, Juan B. Gorordo celebrating the inaugural mass and consecration on Sunday, August 31, 1924. Construction of the present church started in 1894 by Fray Valentin Utande, until its completion by Padre Quiterio Sarigumba in 1925. The church contains one of the most unusual ceiling artwork compositions in the country, done in the 1920’s.

The neoclassical façade of the church has the typical portico with Corinthian columns. The portico and bell tower, both added later, blend well with the original character of the church. A choir loft is found above the main entrance. The church in cruciform plan has had extensions to accommodate the growing parishioners.

There are three richly carved retablos in the altar, one at the central nave and two at each arm of the transept. The main retable facing the nave has the icon of the patron saint, S 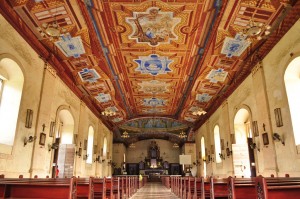 t. Augustine, occupying the upper center niche. Beneath this, to the left, is the niche for St. Joseph and to the right, the Blessed Virgin Mary.

To the rear of the ruins and at some distance, stands a five-story bell tower/watch tower built in 1851. Octagonal in plan and covered by pitched roof, the tower is one of the tallest of its kind in the country. The tower is in bad state and needs immediate intervention for its conservation. 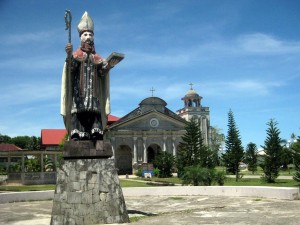 were declared Important Cultural Properties by the National Museum and the National Historical Commission of the Philippines.

Panglao Church was unaffected by the October 15, 2013 earthquake.